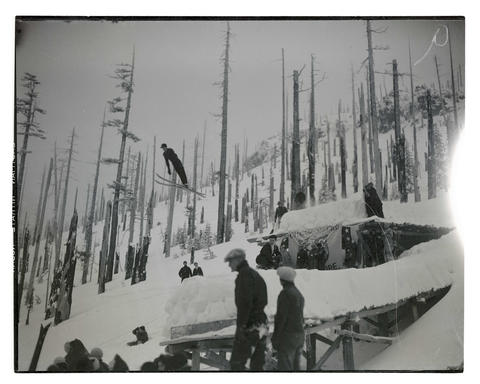 Photograph of John Elvrum in midair above Multorpor jump hill during a competition at the Portland Winter Sports Carnival on January 22, 1933. Events and festivities were held at Government Camp, Oregon. This photograph was one of five, including image Nos. 374N0495 and 374N0496, published on Page 1 of the Oregon Journal on January 23, 1933. The photographs were published under the headline “Some Views from the Court of the Queen of Snows.” This photograph had the caption: “John Elvrum of the Cascade Ski club, jumping.” The photographs accompanied a story, headlined “Winter Sports Events Viewed by Thousands.” Image note: The number 9 is written on the negative and is visible in the upper right corner of the image. Light leak on negative.