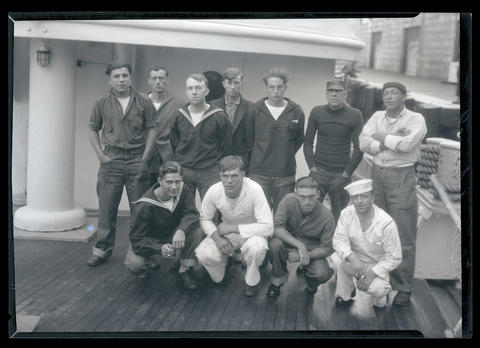 Group portrait of eleven crew members from the steamship Laurel, which wrecked on Peacock Spit near the mouth of the Columbia River on Sunday, June 16, 1929. According to reporting in the Oregon Journal, the ship, carrying a load of lumber, encountered high seas from a gale as it left the river on Saturday, June 15. Around 2:30 or 3 a.m. on Sunday, June 16, the ship struck a sandbar and broke in two. One crew member, Russell Smith, died when a wave swept over the ship and he was washed overboard. Rescue boats retrieved the remaining crew members on June 16 and June 17, except for the captain, Louis Johnson, who initially refused to leave. He was rescued on Wednesday, June 19. A cropped version of this photograph was published on Page 1 of the Oregon Journal on Monday, June 17, 1929, with the following caption: "Photo taken on deck of coast guard cutter Redwing this morning by Roy Norr, Journal staff photographer, showing group of those rescued from the Laurel; they are, front row, left to right, (all kneeling) James H. Miller, C. H. Salenjus, Kenneth McNaught, C. C. Morrison; back row, left to right, N. Martincivie, Joseph Meyers, J. C. Cavanaugh, Dewey Wilcott, William Oden, Bob Haley and A. Wilde. Four other survivors were in the hospital, three more were exhausted and could not be disturbed to be photographed." Image note: The text “Crew of Laurel” is written on the negative and is visible on the right side of the image.